FIGHTING FIRES IN THE BRAZILIAN PANTANAL

Wildfires have a range of negative effects on the environment and the people that inhabit the area. They directly kill a vast array of species, large and small, especially when the animals cannot escape the flames quickly. Threatened species that are already struggling to survive in today’s warming climate, are being pushed further to extinction now at an alarming rate. In addition to the direct death from fire, many animals lose their shelter, dens and feeding sources, especially in the areas of riverine forest. Aside from this, when the rains finally do come, tons of ashes will reach the river systems and lagoons, killing millions of fish and fouling water sources.

The current fires are located in and around all of the major communities throughout the Pantanal, including the world famous Transpantaneira and Porto Jofre region, a small fishing village along the São Lourenço River, and our gateway into the Northern Pantanal.

Fires in the Pantanal are not an irregular thing, in fact each dry season fires naturally occur there. However, after each dry season, the rainy season comes, followed by seasonal flooding across the entire region. This hydrologic cycle naturally keeps these fires in check, but this year the rains and flooding were extremally mild, resulting in the driest rainy season in the last 50 years.

To access Porto Jofre you have to cross 90 wooden bridges.  The local people are working endlessly to keep these bridges from burning down; clearing out the dry, flammable vegetation and creating fire breaks throughout the heavily affected areas.

These fires that naturally die out have not done so this season, and instead are spreading out of control through large forest. Fires that are thought to have been put out, are unfortunately reappearing days later as they continue to burn under the surface. Once the fire enters the root systems it can travel underground and appear to be out, but actually smolder there for a few days, and with the heat of the afternoon can spark again.

The fires, combined with Brazil’s current economic crisis and lack of resources from the government, has forced Pantanal locals to take matters into their own hands in the fire fighting efforts. Many tour operators, lodge owners and associates have volunteered to come help fight the fires. They have given their safari trucks to load water in and rigged their jaguar viewing boats to fight the fires from the river, in an attempt to stop the spread from entering the State Park, which is now only a rivers width away from the fires. They have even opened their lodge doors to accommodate all the fire fighters coming in, providing food and water, and are now too, on the front of the lines, desperately trying to save what they still can.

The Pantanal and Its People

In 2000, the Pantanal was declared a UNESCO World Heritage Site being known as the largest tropical wetlands in the world.  It is located mainly in Brazil’s southwestern states of Mato Grosso and Mato Grosso do Sul, just below the Amazon rainforest.  It’s a mosaic of seasonally flooded wetlands, grasslands, and woodlands and represents an extremely biodiverse home to thousands of plant and animal species; including the elusive jaguar.

The Pantanal is one of the most remote and pristine places for wildlife viewing in South America, representing optimal jaguar habitat and the only place in the world to observe these cats in the wild. Depending on the year’s floods and drought, it is estimated to be 140,000 and 195,000 square kilometers (54,000-75,000 square miles). Around 80% of the Pantanal gets flooded during the rainy season (November-April), supporting an astounding biologically diverse collection of aquatic life which in turn helps support an enormous range of terrestrial life. Until now new flora and fauna are still being documented and studied in the Pantanal. There are approximately 3500 known plant species, 700 bird species, 265 fish species, 95 mammalian species, and 162 reptile species. Making the Pantanal a biological hot spot with the jaguar as the apex or keystone species; playing an extremely important role in regulating the populations of prey species.

For this reason, the Pantanal people rely heavily on ecotourism as their main source of income, as wildlife photographers and filmmakers from all over the world come to this part of South America for unique wildlife footage.

The Pantanal is home to over 200,000 inhabitants, including many indigenous tribes and cultures throughout the area.

Due to the impact of covid-19, the people and communities of the Pantanal have taken a massive hit to their livelihood’s as they are no longer able to provide for and support their families because of the lack of tourism, governmental support and work available.  Not only are the local people struggling to feed their families, but now they are faced with the dire threat of losing their homes to these uncontrolled fires.

How the funds will be spent 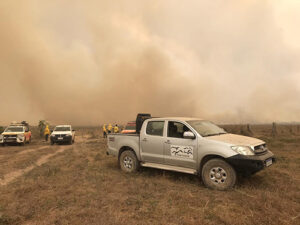 To support the people of the Pantanal during these difficult times, Climb for Conservation partnered with the Jaguar Identification Project and Panthera to raise over $70,000.

-80% will be administered by Panthera Brasil (our partners on the ground) to local people that would normally be employed for tourism operations to help fight these fires.

This money will also be used to buy protective  equipment and firefighting tools such as water pumps, hoses, and leave  blowers.

-20% of the profits will be used to buy food baskets and other essentials and will be distributed around the Jofre region.

Our efforts focus on raising awareness for land, water, and wildlife conservation.
According to recent studies, unless we take action now, human activities and
climate-related change could drive 1/2 of all species on Earth to extinction
by 2100.